I lack self discipline.  I also exercise questionable decision making at times.  These are two things I am very self aware about.  I truly believe that 90% of the anxiety and stress I face on a day to day basis could be avoided by simply doing what I’m supposed to do and doing what I’m supposed to be do to the best of my ability.  I do believe that.  Do be do be do.  So what’s the disconnect?  Seems simple enough.

Today I wanted to go for a bike ride after work.  Over the past few weeks, I’ve been kicking around this idea of doing more structured training to improve my cycling.  What I mean by “structured”  training, is following a prescribed workout  each time I ride involving specific training goals such as interval training, endurance, or recovery.  I had some success with following such a program several years back when preparing for a mountain bike tour I had planned in Arizona.  The problem with structured training is that like with most things structured, it is incredibly boring.  I don’t do well with boring.  I, myself am pretty boring, and so I’m all stocked up.  I like to go out and ride trails and pedal as fast I can until my legs feel morbidly limp, and by the time I get home I can barely pick up my bike to put it away.   I then like to eat like a pig, load up on sweets, and pass out.  That is pretty much my idea of heaven.  That however, is not the formula for Olympic gold, or even the formula for a 42 year old who needs to function at work the next day after his bike ride.

All weekend, I was telling myself I needed to get an endurance ride in Monday so that I could take advantage of the one day of the week without rain in the forecast to do my endurance ride.  An endurance ride, for me, is riding about 2-3 hours at a pace that requires no more effort than that which would  allow you to easily maintain a conversation while pedaling.   Boring.  And, when it rains out, you ride in the rain, or on an indoor trainer.  Coma inducing.  I was all about that long endurance ride until about 3:30 this afternoon.  I don’t consider myself a morning person.  I do feel I’m more productive when I get up early, but I hate getting out of bed. Somewhere around 9:30 I usually start to move pretty productively.   By 3 pm my mental focus and energy start to wane.  I guess I’m not a morning person, or a night owl.  I’m kind of a 10-2 person if we’re really being honest.  So at around 3:30 I was already mentally skipping my ride all together, but by 6 I’d mustered up the motivation to at least head out on a ride.  The endurance idea was mostly tossed.  I had thoughts about taking it easy when I got into the woods, but I don’t know think I actually kidded myself into believing them.  As usual, once I got on the trail, all bets were off and I was pedaling hard.  In my defense, the weather was freaking perfect, and the trails were just wet enough to be grippy on most sections and maybe just barely too soft in a few spots.  I’m not going to beat myself up for this one.  I even got a Personal Record on one of the trail segments.  My fitness may have suffered a blow, but my Strava cred didn’t. It was a great ride.  I even explored some of the trails around the Wadsworth Mansion Property that I hadn’t ridden on before.  I was having fun.  Undisciplined often equals fun.  We all daily face the dilema of either striving for long term satisfaction by denying ourselves short term pleasure or giving in for the quick fix.   Earlier today I had already been defeated in such a challenge as  I chose the Boston Cream donut to lift my dwindling resolve In the early afternoon.

Anyway, I was on a roll, and then I had to push my luck.  I allowed myself to suspend good judgement while living in the moment, and decided that the square edged curb right before my condo was too easy not to hop onto.  Had I exercised proper discipline, I would have more thoroughly checked the tire pressure in my tires with a pressure gauge  before leaving the house, rather than rely on my less accurate hand squeeze, which almost always reads, “good enough”  unless the tire is completely flat.  So as I hopped up to clear the curb, had the tires been properly inflated, when I mistimed my approach, the resulting contact with my rear wheel and the square edged concrete would have been a little jarring if noticeable at all.  However, there must not have been enough pressure to rebound me off and instead I experienced the simultaneous tire and mood deflation in a split indelible second as air rushed out of the rear tire.

And this is the result: 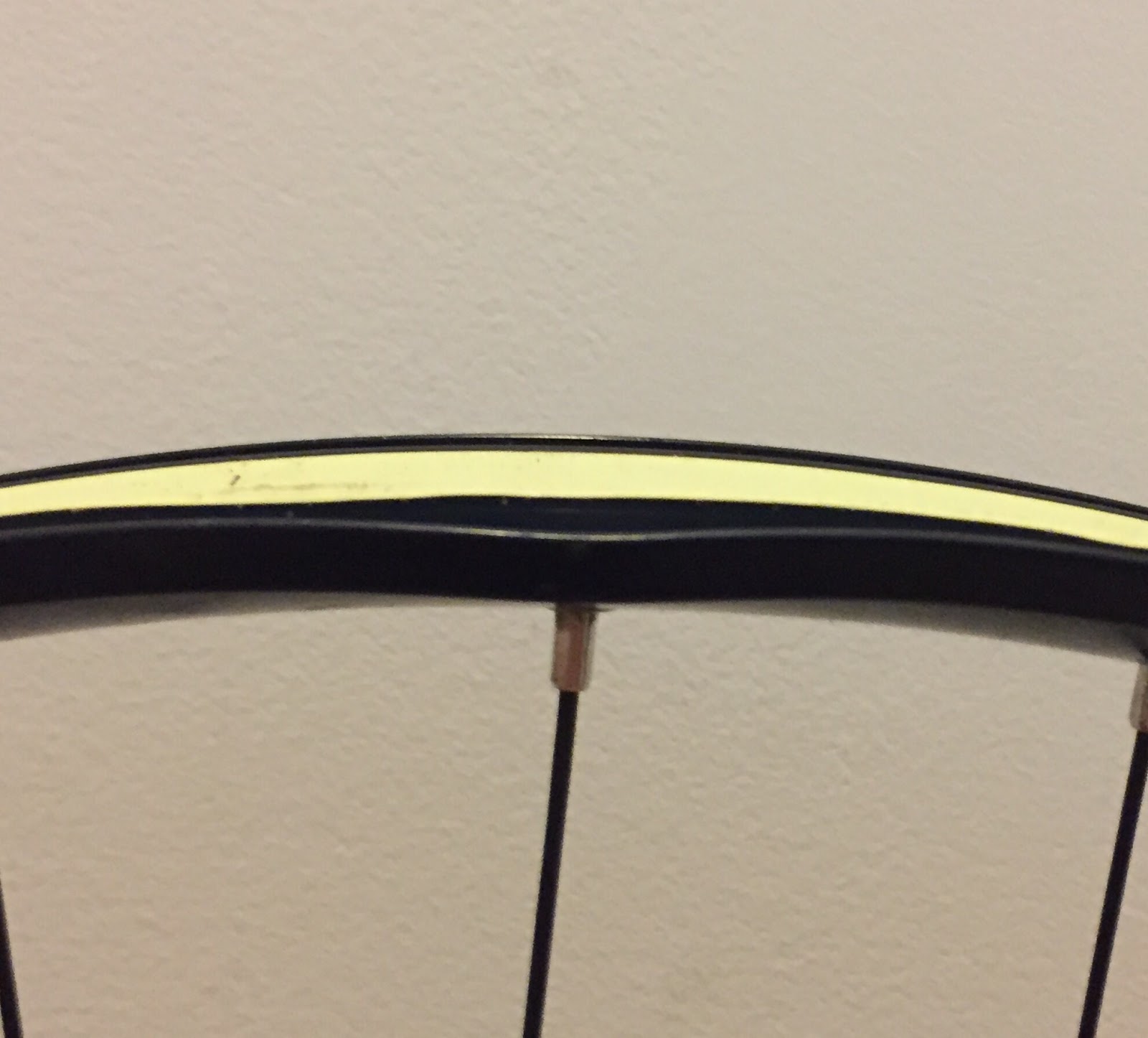 This is no bueno. If you’ve read my previous blog, you know I’m no bike mechanic, but this may be the end of this rim. I’m going to throw a tire back on and see if it will hold air. If that doesn’t work, I’ll probably just have to use inner tubes instead of the preferred tubeless setup it’s designed for. Ultimately, I’ll need to replace the rim.

Despite my immediate frustration, there is one way for me to salvage this setback.  Despite the disappointment of having dented a very expensive bicycle rim as a result of yet another lapse of discipline and good decision making,  I have gained some perspective.  Sometimes age brings wisdom.  The wisdom in this scenario, is that there is a poignant lesson here for me.  This is not a reason to yell the obscenities I am so capable of extoling, which I would never want my mother to hear, or  beat myself up, or cry over spilled milk.  It is a reminder to me that I need to pay attention to what I’m doing, even when I’m having fun, and try not get carried away.   This time the consequences were just bad enough to get my attention but not so bad to result in any actual serious consequence.  I hope that I’m wise enough to learn from this lesson today, and it helps me avoid a much more costly mistake later on.  If that is the case, the value of this lesson will far exceed the cost of a new rim.